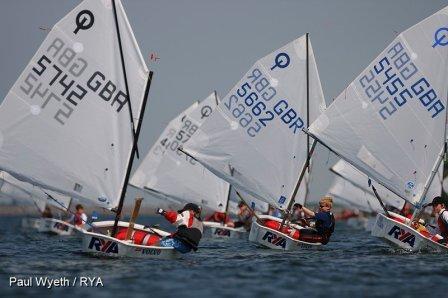 The Optimist Class is the perfect place for our young members to start to sail its a brilliant little boat for learning, and for highly competitive one-design racing right up to the age of 15. In fact, the Oppie is one of the most popular dinghies in the world, with over 150,000 registered worldwide.

The first Optimists appeared in Seaview in 1982, followed two years later by a Royal Yachting Association loan of six boats which arrived on a trailer - enabling the start of Oppie Week and the first competitive racing for the younger cadet members of the club. The boat soon became a firm favourite for our younger sailors and the thriving class is growing in strength year by year.

The Club runs a busy training schedule for Optimist sailors, starting with a three-day course during May half term, followed by several week-long courses throughout the summer, which cater for all levels - from complete beginners to experienced racers.

Seaview Race Week is a highlight of the season, with more than 20 Oppies lining up on the start line. There is also daily racing from the club line and a chance to compete in the Sea View Yacht Club, the Bembridge Sailing Club and the Seaview Village regattas. Some of the more adventurous sailors have ventured off the Island to compete at the Optimist Nationals at the Weymouth and Portland National Sailing Academy.

There is lots of silverware to be won, not only for racing but also for seamanship and general attitude, so you too can become a part of the SVYC history.

handed on to siblings, cousins etc.